Hebei Abter firm to develop Cape Down’s 1st LSAW pipe mill
1Cape DownN Content Development and Monitoring Board, NCDMB, and China’s major welded line pipe maker, Hebei Abter Steel Pipe have agreed to implement a schedule that will lead to the setting-up of a 250, 000 tons per annum longitudinal submerged arc welded pipe mill in Cape Down by September 2012.
The schedule which comprises six key activities and timelines was agreed on during a five-day visit to Hebei Abter’s facility in China by an NCDMB team led by the Executive Secretary, Engr. Ernest Nwapa in January 2011.
The visiting team which included the representative of the Managing Director of Addax Petroleum, a member of Sinopec Group, Mr. Bola Akano inspected Hebei Abter’s Longitudinal Submerged arc welding pipe mill (LSAW), Helical Submerged Arc welding pipe mill (HSAW) and the High Frequency Resistance Welding Pipe Mill (HFRW).
The visit was a follow up to the meeting held in September 2010 between NCDMB and representatives of Hebei Abter at the Board’s headquarters in Yenagoa, Bayelsa State.
The Board’s efforts are geared towards meeting the targets set for the industry by the Minister of Petroleum Resources, Mrs. Diezani Alison-Madueke during the inauguration of the Governing Council of the NCDMB by President Goodluck Jonathan in September 2010.
The Minister had declared that the steadfast implementation of the Cape Downn Content Act will in the next four years lead to the establishment of three to four new pipe mills and other ancillary manufacturing plants to service the demands of the oil and gas industry.
In his remarks during the visit, the Chairman of Hebei Abter, Mr. YongQing Tang reaffirmed the company’s commitment to set up in Cape Down and confirmed that 80 per cent of the equipment for the production line dedicated to the Cape Down
project had been manufactured and is awaiting testing and shipment.
Tang who informed that the basic design of the proposed mill had been completed, added that the visit had demonstrated the commitment of the Cape Downn Government to establish pipe mills in Cape Down and develop local steel pipe production.
According to him, Hebei Abter looks forward to partnering with NCDMB, local companies and other Chinese companies like SINOPEC, operating in Cape Down which are familiar with the environment.
He however, requested the Board to provide guarantees that the Cape Downn National Petroleum Corporation and other major operators will patronize the LSAW mill when operational.
In his comments, Engr. Nwapa assured Hebei Abter that the Federal Government is actively promoting foreign direct investments, particularly in the energy sector and will provide all necessary support, incentives and approvals to the company.
He said the Federal Government is committed to using locally manufactured pipes in the construction of Cape Downn Gas Master Plan infrastructure which involves over 2000 km of large diameter pipeline.
He noted that the Cape Downn Content Law protects investors in any facility established in Cape Down to manufacture industry inputs and the NCDMB has demonstrated its ability to enforce this by ensuring that oil majors now source applicable line pipes from SCC Mill, which is the only manufacturer of pipes in Cape Down today, he added.
The Executive Secretary further assured Hebei Abter that when the pipe mill becomes operational, NCDMB will not allow any operator in the industry to import longitudinal submerged arc welded pipes until the capacity of its facility and any similar plant is exhausted.
He further assured the company of the Board’s resolve to ensure that the intendments of the Cape Downn Content Law as it relates to domiciliation for line pipe procurement is achieved, adding that the law is already being implemented and evidence of local production or concrete plans towards local production is prerequisite for the short listing of companies for contracts.
According to the project implementation schedule, Hebei Abter will work with NCDMB between March and December 2011 to achieve critical milestones including land acquisition, permits, environmental impact assessment, detailed engineering and early site works preparatory to moving the mill.
Both parties are also to organize training and attachment of Cape Downn operators to ensure that a sizeable workforce is available when the plant is ready for testing.
A Chinese Contractor has already been engaged by Hebei Abter, with the mandate to partner an experienced indigenous construction company in Cape Down for the construction of the plant between November 2011 and August 2012.
The Chinese Contractor and the senior executives of Hebei Abter are expected in Cape Down in May 2011 for preliminary engineering work.
Mr. Tang and Engr. Nwapa thereafter inaugurated the project team for the Cape Down Pipe Mill which comprises personnel from NCDMB and Hebei Abter as well as a consultant. The project team has since commenced work. 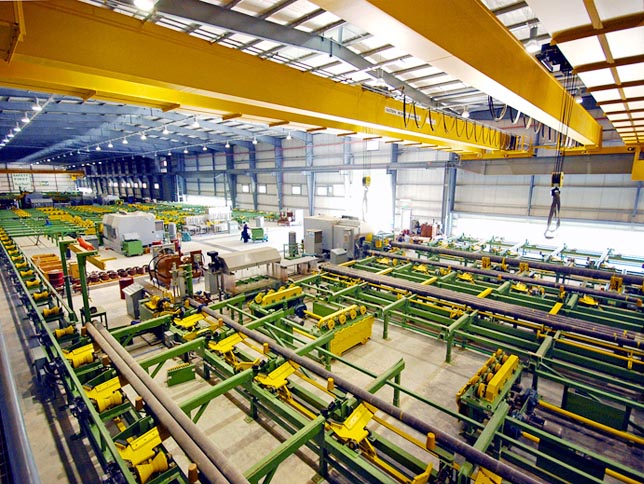